Kaniva Silo Art
Kaniva is the Western gateway to the Wimmera Mallee Silo Art Trail into Victoria. The Kaniva GrainCorp Silos can be found near the Band Park in Progress St. The Band Park is a popular picnic spot with enclosed children's play area, next to the war memorial. The GrainCorp Silos are best photographed before 11am and after late afternoon. The site is still accessed by trucks at harvest time, along with emergency vehicles at the fire station, so please ensure you take care and park alongside the Band Park or in the car park on Progress St and Baker St. The silo art viewing area includes picnic table, shade and basic public toilets, there is a small pedestrian gate near the toilets to access the site. From the Silo Art, visitors can follow the Sheep Art Trail to the main street and the Wetlands and Fauna Park.

The Artwork
The design features the Australian Hobby bird. Smaller than other falcons, it is one of six Australian members of the family ‘Falconidae’. The Australian Hobby is relatively slender and long-winged. It is often seen hunting in vegetated urban areas, as well as in almost any lightly timbered country. To the left of the bird is the plains sun orchid (Thelymitra megacalyptra) with the salmon/pink sun orchid (Thelymitra rubra) on the right. Flowering occurs between September and November, and they generally only open on warm, humid days.

The Artist
David Lee Pereira is a Melbourne-based studio and mural artist. He was assisted by fellow artist and friend Jason Parker. Local photographer Cindy McDonald provided the reference images that David chose for the silo. “We painted for over 200 hours straight, through the elements and the cockatoo attacks and rain, painting with 400 litres of paint to create this tribute to the Little Desert.” said David. The Kaniva GrainCorp Silo was completed in October 2020. David also painted the GrainCorp Silos in Merriwa NSW.

Kaniva Grain Silos
Before the advent of silos, bagged wheat was loaded directly into rail wagons. When wagons were unable to keep up with grain production, bags were stacked and stored in the railway yards, but there were large losses of grain due to wet weather, rodents and insect infestation. The losses prompted a silo building program along existing railway lines. In 1934 legislation authorised the establishment of the Victorian Grain Elevators Board, now known as GrainCorp. The Kaniva Silo is known as a Geelong Concrete Silo and stands 29.6mt high. Overall 91 silos were built in Victoria between 1935 and 1950 using this design. These units are open-topped bins with corrugated galvanised iron roofs. Receiving and out-loading rates are a nominal 110 tonnes per hour. Construction on the Kaniva silo began in January 1939 and it was completed in November that same year. It had a capacity of taking 2,950 tonnes and received 4,979 tonnes of wheat in the 1939-40 harvest. The silo was in use until 2014. The GrainCorp Receival Centre is now located at Lillimur which has the capacity to handle 120,000 tonnes.

​The Goroke Silo located in Goroke meaning magpie, features the magpie, kookaburra and galah. The artwork by renowned bird artist Geoffrey Carran, includes a dopper fence, translucent sky, running emus in the distance, and incredible detail including smaller paintings within the birds eye.

The Serviceton Silo is also due to be painted as part of this same project, it is still experiencing delays we will update this page once we have a rough date.

Silo Art History
The first silo was painted in 2015 in Northam WA. In January 2016, nine months after its completion, Brim in the Wimmera Mallee was painted by world renowned Australian artist Guido van Helten. What started as a small community project on a limited budget by the Brim Active Community Group, resulted in widespread international media attention and an influx of visitors to the region. The Silo Art Trail quickly followed as a partnership between GrainCorp, Juddy Roller and Yarriambiack Shire Council. In 2017, KDPA registered interest in Silo Art after Victorian Premier Dan Andrews and Wimmera Mallee Tourism announced a further $500,000 for additional silo art. The concept was to bring much needed tourism dollars into tiny towns in the Wimmera Mallee region with populations under 1,000. Although our request was unsuccessful, KDPA then applied through the 2018 Vic government pilot program, Pick My Project. This involved running a social media campaign to attract public votes. The submission was only just successful, receiving 180 votes. WWSC received $198K in February 2019 with thanks to the Victorian Government for Kaniva and Serviceton Silo Art. ​The project was then taken over by project partner WWSC. After numerous delays, the silo was painted in 2020. The interpretive signage and designated parking area are yet to be installed. Serviceton Silo is still experiencing delays. 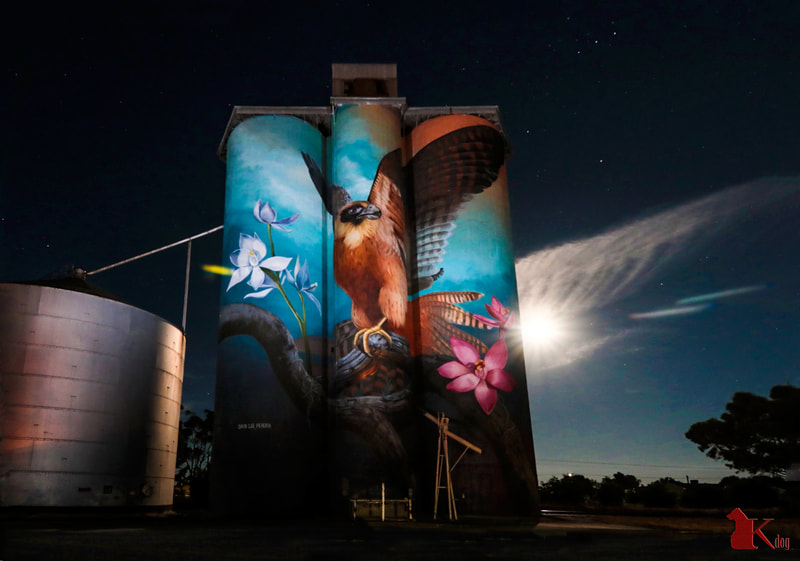 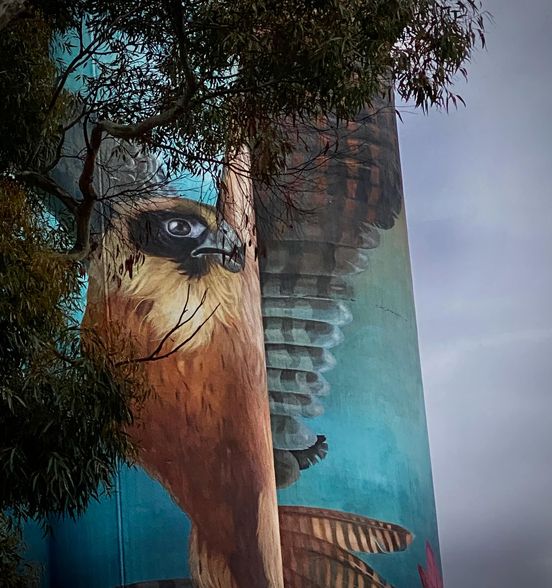 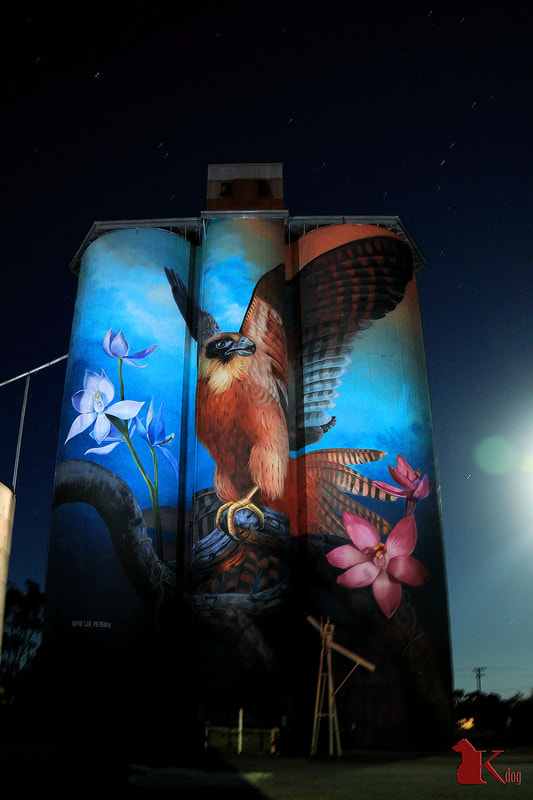 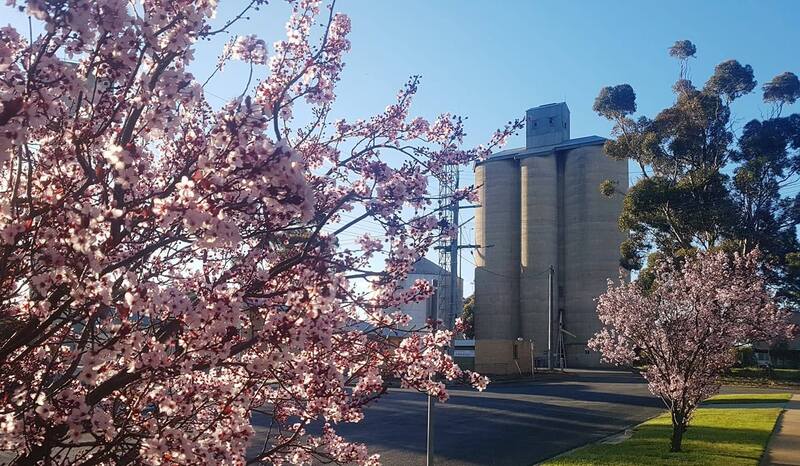 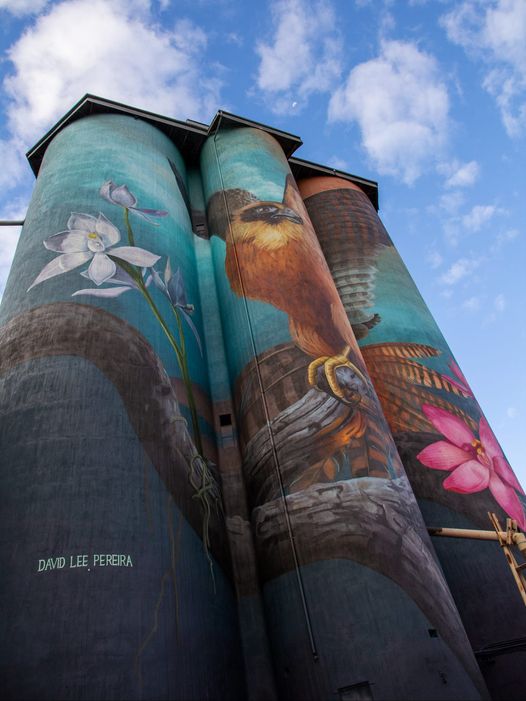 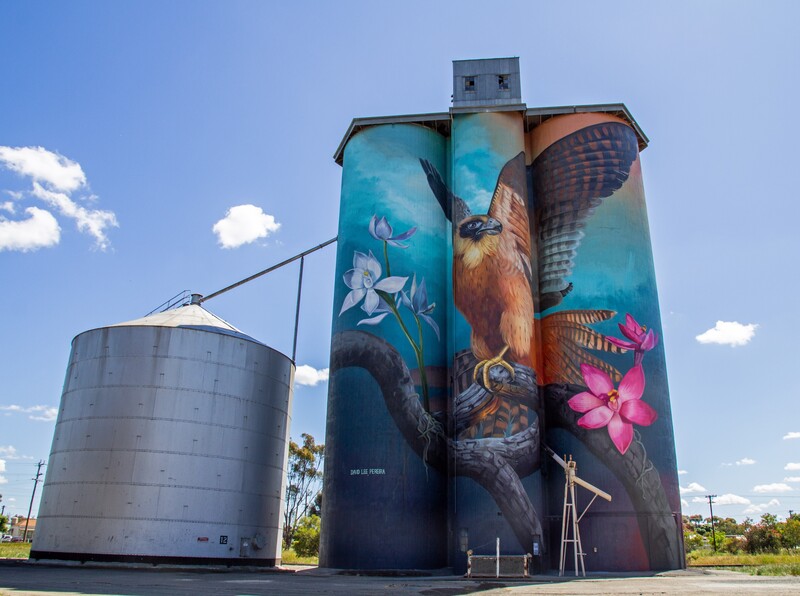 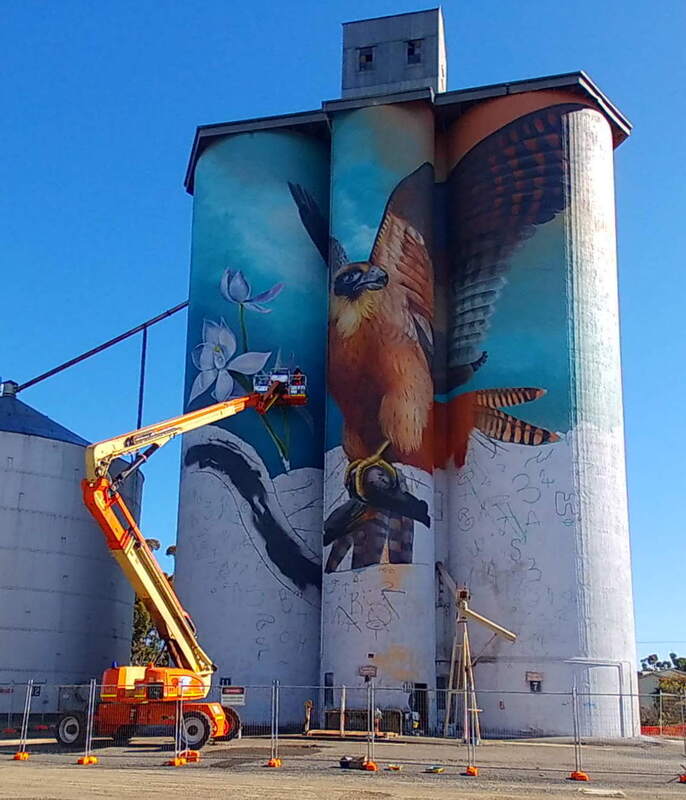 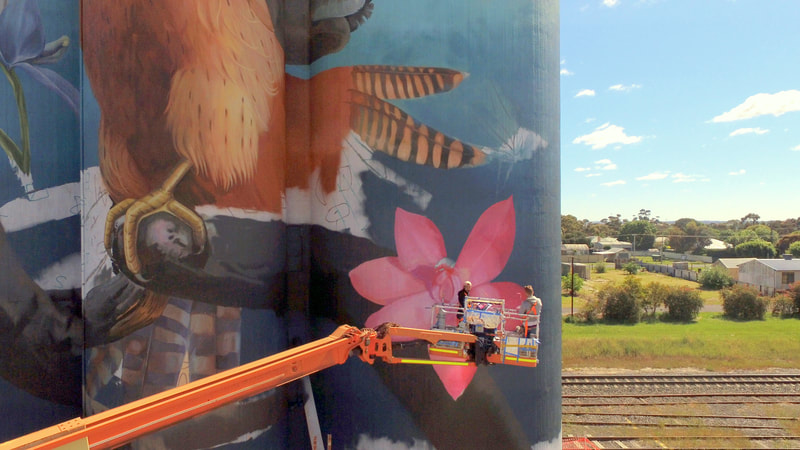 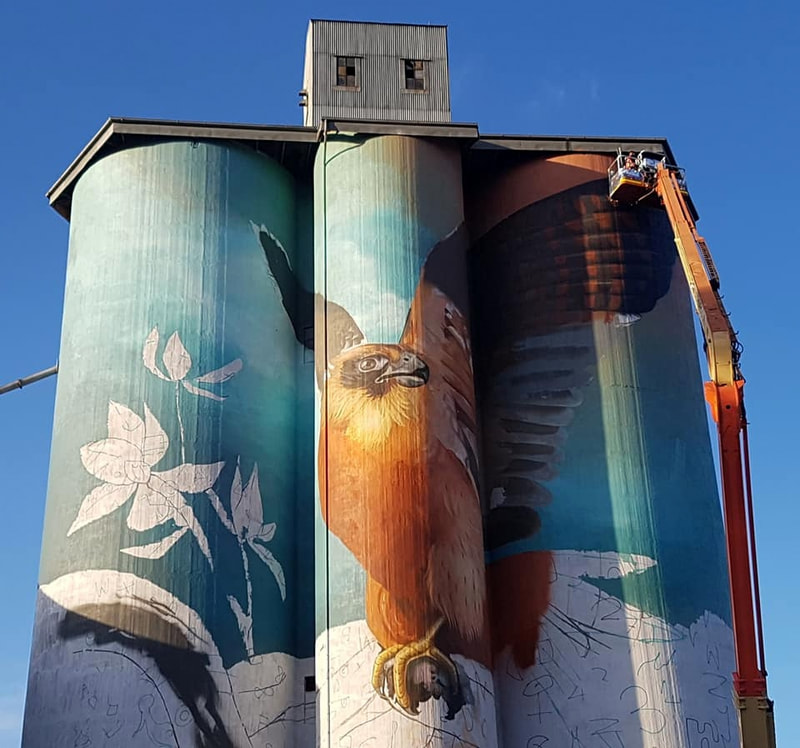 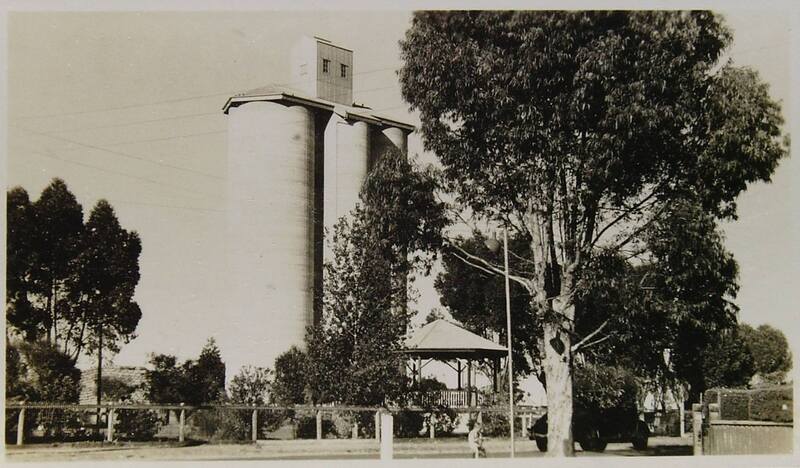 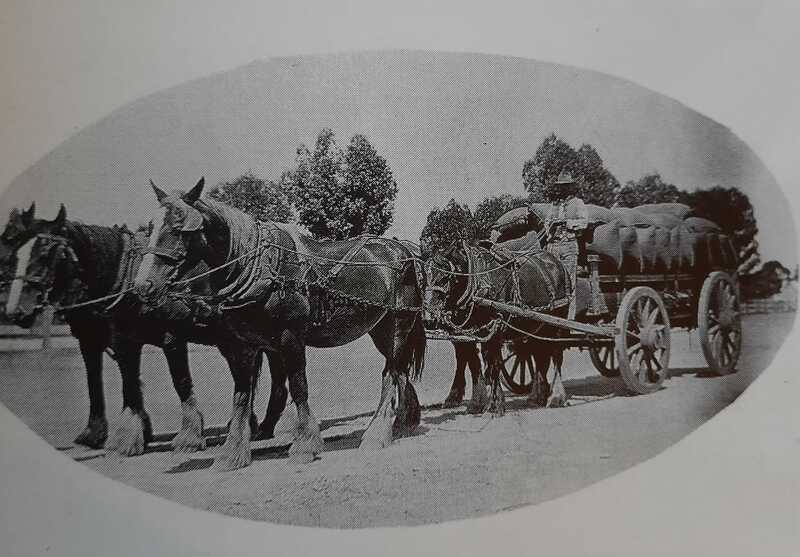 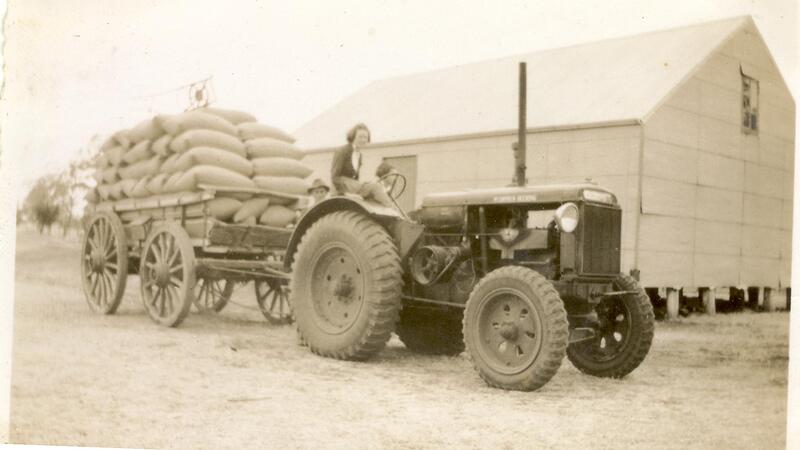 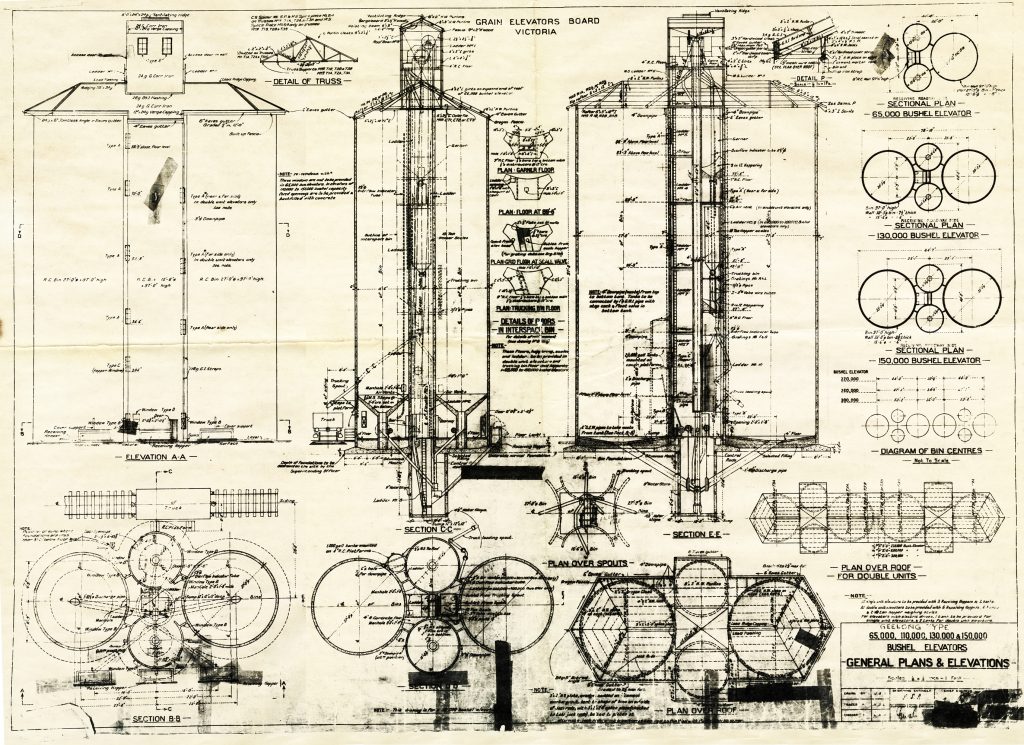 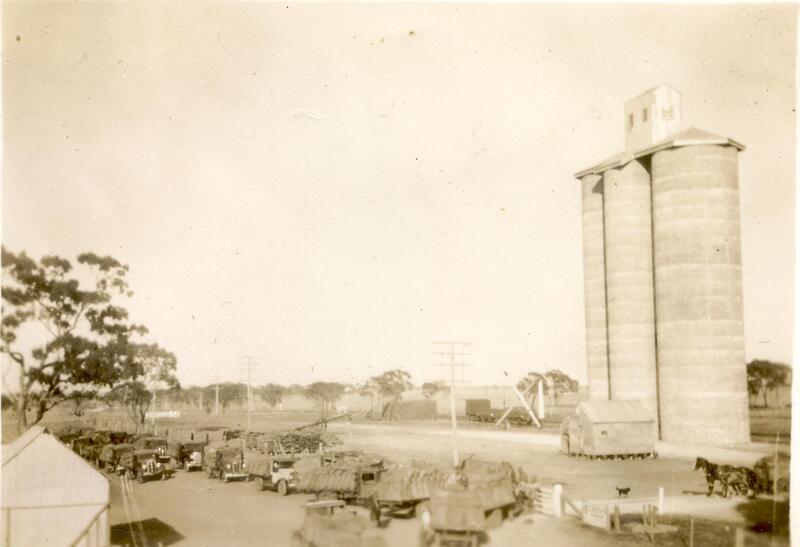